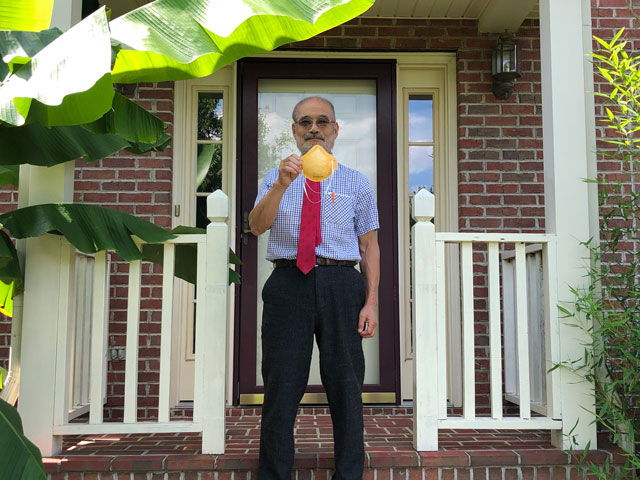 A Conversation with Peter Tsai, Inventor of the Filtration Material in N95 Masks

When working on a problem that affects everyone, such as our Critical Care Decontamination System (CCDS), it makes sense to explore everything. That’s why we recently reached out Peter Tsai, the inventor of the filtration material used in N95 and other respirator masks. When the pandemic hit America, he came out of retirement after a 35-year career at the University of Tennessee (detailed in this Washington Post story) to do more research (such as this emergency medical report).

Tsai has not studied CCDS directly, but says he knows the FDA approved the system to inactivate the virus on N95s. “If they can be decontaminated and the efficiency is still there, why should they not be reused?” he said. “Decontamination is much better than using one for a week.”

His invention works on the notion of a static charge attracting whatever is going through the filtration material. The Battelle process, he said, “It’s already shown if there is no charge decay, or deformation of shape, then it is decontaminated. With static attraction, the virus once captured inside the filter media, it will remain there, even if it is not deactivated.”

Will Richter, a microbiologist at Battelle and one of the inventors of the CCDS, recently spoke with Tsai. Below is a conversation they had, edited for brevity.

WR: I heard you on NPR one day not too long ago and I’ve wanted to speak with you. Now we’ve come full circle.

PT: It’s good to talk to you. Your invention has been a good contribution in a time when there’s a huge demand and shortage of N95s.

WR: It’s been an interesting process. We’re working to improve the body of work we’ve done. We’ve done a lot since our 2016 FDA study.

PT: The N95 was originally designed for one-time use, but if there is a shortage, like there is now, if you can figure out how to sterilize it without degrading the shape, you should do it. I was curious, how can you move the vapors through each individual respirator?

WR: The process uses a vapor form of hydrogen peroxide. We have teams of four people who get into high level PPE and they can spend four to eight hours loading a chamber. We start the decontamination process by dehumidifying the space then injecting peroxide initially at high rate until we get condensation. Once we achieve condensation, we allow the chamber to “dwell,” where condensation is maintained and ultimately where decontamination is achieved. Once you lay down that fog—we describe it as the mist on your bathroom mirror when you take a shower—the light deposition of liquid, we know that after a certain amount of time it will penetrate the masks. Initially we thought it would not take that long. But it’s a three-layer mask, so it takes a while to migrate through it. Then, we take the time to air them out so they are at safe levels—one part per million is the safe exposure limit. We take it down to .8 ppm before we release them.

PT: Is Covid-19 being cleared?

WR: Yes. We designed it to kill spores, which are heartier than the virus. We had a lot of confidence, but we went back and tested on SARS-CoV-2 and it cleared it too.

PT: That is very good.

WR: We’ve used this process for a couple of decades in the lab. We know it works on materials. It’s fairly gentle on plastics. That’s why we thought it would work on N95s.

PT: So it goes on the masks and then penetrates through them. Very good. That’s great. If there is something you can do, you should do it.

Note: Tsai lives in Knoxville, Tennessee, where he’s working with the University of Tennessee (UT) and Oak Ridge National Laboratory (ORNL). Though Battelle and UT team to manage ORNL for the United States Department of Energy, Battelle has no official or direct affiliation with Tsai.