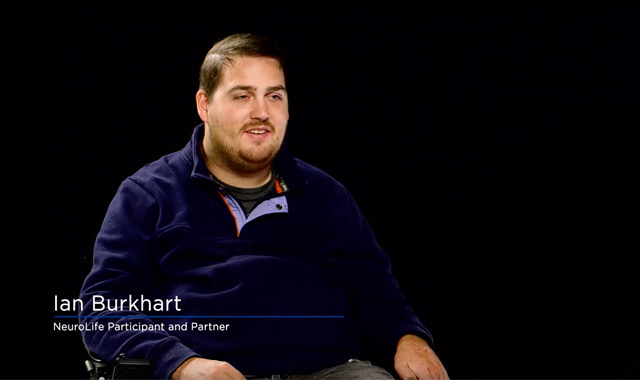 A Front-Row Seat to Solving What Matters Most

Working at Battelle for more than a decade has afforded me many great opportunities to learn about science, R&D and the business that runs one of the world’s great innovation drivers. Battelle’s 90-year history is filled with remarkable achievements, many of which have changed the world. For me, however, the pinnacle of my professional experience as a public relations and social media practitioner is our NeuroLife program – and I’ve been able to watch from a front-row seat.

I became aware of the project nine years ago, when some scientists and engineers here met with me to prepare for what would be a first. We invented a system – Battelle’s NeuroLife® Neural Bypass Technology – to help a paralyzed person regain control of his hand by reading his thoughts, translating them with a computer and algorithms and then transferring those thoughts to a sleeve to stimulate his forearm muscles to make his hand move.

That same year, Ian Burkhart, an athletic kid from the Columbus suburb of Dublin, went on vacation in the summer after his freshman year at Ohio University. He dove into a wave, hit the top of his head on an unseen sandbar and was instantly paralyzed. Had his friends not been there to drag him out of the water, he wouldn’t have lived.

Ian became the first clinical trial participant in our project, in conjunction with surgeons and doctors at The Ohio State University Wexner Medical Center. He’s been doing sessions two or three times a week for five years now and he’s come a very long way.

Recently, I had the opportunity to interview Ian about his journey with our NeuroLife technology. Check out this video to watch him tell his story in his own words.

Ian has been kind and gracious and generous with his time throughout all the publicity we’ve done, and I count him as a friend. Our time together has been a reward and he has been so much more than a participant in the process. He is a partner, a collaborator and helps guide the research.

Here are some additional excerpts that didn’t make the video’s final cut. Take a look.

Q. When somebody brought up the notion of voluntary brain surgery which, what did you think when you heard that?

A. When I was first asked about the surgery, it was something that was pretty crazy because I would have never pictured it being an option. But I felt like I was in pretty good hands with the team that I was working with at the time, and this technology was pretty sound and I wanted to try to see how we could get this out to myself and other people. So, really it was something that I wanted to do.

Q. Did you consult with your family?

A. Yeah. I remember talking to my family about it and they all thought it was crazy. They really wanted me to kind of slow down to make sure I was thinking everything through because I just had my traumatic spinal cord injury a few years prior and there were some big risks to this surgery. If things didn’t go right, I could lose a lot of the improvements that I had gained, but I saw it as a great opportunity that I really couldn’t say no to.

Q. I’ve noticed you have this ability to get into “go-mode,” where emotions are put aside and you are very focused. Where does that come from?

A. I think throughout athletics when I was growing up – that definitely helped being able to kind of flip that switch and say ‘OK, this is go time.’ But it’s really just been a part of me. As long as I’m motivated for what I’m working towards, it makes it really easy to flip that switch.

A. Exactly. It’s saying that things aren’t permanent, things can change. And if you have enough people working towards the problem, it can change quickly, and change for the better, which is something I’m really excited about.
I really hope we can move this product from something that’s only used in the lab to something that’s used in the home – and that can be used by more individuals. It’s a very promising technology and I think to not get that out into the hands of other individuals would be a very negative thing to do. It needs to be shared with many other people.

Q. How much does positivity have a role to play in your success?

A. Having a positive mindset, I think, has given me so many opportunities I would never have had. I made an early decision after my spinal cord injury to not be down and upset about it. Not to say that I don’t have bad days here and there because I think we all do. It’s just all relative to our situation, but if you can tell yourself that overall you want to have a positive outlook on life, and look at the positives versus the negatives, you’re going o have many more opportunities to do great things, and overall just have a better quality of life.

Q. You did a session today. Maybe three years ago, if I’d have talked to you after a session, you would have been wiped out. Today you seem fresh, and if I didn’t know better, I wouldn’t know that you had made the effort.

A. Exactly. It’s something that when first started, I would be in two-and-a-half, three-hour sessions and just be completely mentally drained after because asking someone to think about moving their hand is something that’s completely foreign. I never thought about it before my spinal cord injury and I had to learn that new language, which by the way, there’s no one that really can teach you the language.

It took a lot of focus and a lot of concentration to the point where after those sessions I was wiped out and just did not want to do anything. Now it’s something that’s like riding a bike to me. It’s second nature. I’ve been able to now finish the session and be here and talk to you and just continue on with my day.

About the Author
T.R. Massey handles media relations, including social media, at Battelle. He's been with the company for more than 11 years.