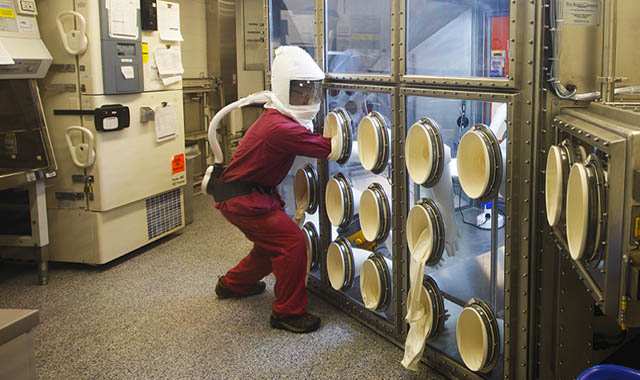 Antibiotic-resistant pathogens are on the rise. Why don’t we have more new antibiotics in the pipeline to combat them?

The medical industry is in a continual arms race in the fight against microbial pathogens. For several generations, we have relied on antibiotics to control bacterial infections, including post-surgical infections and potentially deadly diseases such as strep throat (scarlet fever) and syphilis. Now, new strains of antibiotic-resistant bacteria are starting to threaten the progress we have made. A 2013 report by the Centers for Disease Control and Prevention (CDC) found that at least 2 million people are infected with antibiotic-resistant bacteria in the U.S. each year, and 23,000 die as a direct result1. Many of these infections – like Methicillin-resistant Staphylococcus aureus (MRSA) and multi-drug resistant strains of pneumonia – are commonly acquired during hospitalization.
However, while the microbes have made progress against our existing antibiotics, the industry has very few new candidate therapies in the pipeline to combat these emerging resistant pathogens. To make sure we are prepared for the next outbreak of resistant bacteria, we need to look at the market and regulatory forces that disincentivize research for new antibiotics and put systems in place to overcome them.

The Market and Regulatory Resistance to Antibiotic Development

Research and development for new antibiotics runs into the same basic problem faced in the development of “orphan drugs” for rare medical conditions or countermeasures for chemical and biological weapons: it simply isn’t profitable. Companies wishing to develop new antibiotics face significant development and regulatory challenges with no guarantee of a return on their investment.

Some of these challenges stem directly from the nature of the infections themselves. Others are grounded in market forces and regulatory processes. Some of the biggest barriers include:

High clinical trial costs. Outbreaks of most strains of resistant bacteria are – so far at least – sporadic, rare and hard to predict. This makes finding subjects for clinical trials difficult and expensive. With a small pool of subjects that may be widely dispersed in terms of time and geography, the cost per patient for clinical trials for new antibiotics can be astronomical compared to studies involving more predictable and common conditions.

Uncertain regulatory pathway. The FDA Animal Rule2 (21 CFR 314.600 for drugs and 21 CFR 601.90 for biologics) provides an alternate pathway to product registration and approval for therapies that cannot be practically or ethically tested in human clinical trials. This pathway has been used for development of new countermeasures for chemical and biological warfare agents as well as for some rare but virulent diseases such as Ebola. However, the rule has not yet been applied to new antibiotic therapies, and its potential as a pathway for antibiotics is currently a gray area. The Animal Rule is primarily intended for products that cannot be tested on humans rather than products that are simply hard and expensive to test on humans. In addition, the lack of well-characterized systems in which to evaluate efficacy makes it difficult to justify using an alternate regulatory pathway. With significant challenges in gathering both clinical and preclinical safety and efficacy data, developers are left with no clear path to market approval.

Lack of well-characterized preclinical models of infection. While preclinical models of infection have been validated and characterized as a surrogate for evaluating countermeasures against many human pathogens – including biological warfare agents such as anthrax, botulism and plague – this work has not yet been formally extended to emerging antibiotic-resistant pathogens such as multi-drug resistant bacterial infections resulting in pneumonia. The disease progression for many of these infections may be very different in traditional laboratory research models compared to a human. The way the models metabolize potential antibiotic drugs may also be different. These differences make it difficult to extrapolate drug safety and efficacy data to humans who may present very different disease progression and reactions to the candidate therapy. A lack of surrogate models also makes it difficult to execute predictable screening work to identify potential candidate drugs prior to progressing to preclinical or clinical trials.

Small, unpredictable market. Even if a new antibiotic is approved, it is difficult for companies to predict the market size for their new product. As long as outbreaks remain small and sporadic, manufacturing costs for new therapies targeted at specific microbes will be high. Pharmaceutical companies may not see a return on their investment for years, if at all.

Breaking Through the Barriers

With so many financial and regulatory barriers, it’s easy to understand why companies are reluctant to start down the path of discovery for new antibiotics. However, getting new antibiotic drugs into the development pipeline is both urgent and essential. We cannot wait until one or more of these emerging pathogens becomes a deadly epidemic before looking for new products to combat them.
To address these challenges, the pharmaceutical industry and regulators will need to work together to break down the barriers to development. There are already successful public-private partnership and incentive models for orphan drug programs and development of medical countermeasures for CBRN defense that could be utilized to reduce the financial barriers for development of new antibiotics. In addition, the industry needs to be looking for ways to speed up discovery to get more candidates in the pipeline and develop clear pathways to regulatory approval. There are several areas where the industry should focus right now.

Expand the development pipeline. The early development pipeline for antibiotics is alarmingly thin. Very little discovery work has been done to identify new drug candidates. “Big data” methods could be leveraged to help speed up discovery. Battelle used an analytical tool called Sematrix™ to identify bacteria likely to be resistant to certain classes of antibiotics based on genomic data. Similar analytical methods could one day speed up drug discovery work by mining large corpora of scientific literature to identify the most promising pathways for research and development.

Accelerate development of new preclinical research models. Development and qualification of new research models for antibiotic-resistant bacterial diseases is critical for early development work and could also play a role in regulatory approval. Battelle has extensive experience in developing and characterizing these models for evaluating safety and efficacy of countermeasures against chemical and biological warfare agents. The same methods that were used to characterize models for anthrax and plague can be extended to develop and refine models for emerging antibiotic resistant bacteria. Multi-drug resistant bacterial infections resulting in pneumonia is one of the most urgent threats right now and may provide the best opportunity for immediate development.

Reduce regulatory costs and risks. Ensuring that new antibiotic therapies are safe and effective is absolutely essential. However, we need a new regulatory model for antibiotics that reduces the need for large-scale Phase III clinical trials, which are simply not feasible for many antibiotic resistant pathogens. John Rex has proposed a four-tiered regulatory model for new antibiotics3. In this model, a Tier A drug, used as an option when a resistant pathogen is suspected, would go through two phase III trials, while a Tier D drug, used only as an emergency measure when all other options are exhausted, could be approved using the Animal Rule. This would allow a phased approach to market release, getting critical new options to the market quickly for use when no other options are available, and expanding their use gradually as clinical trial research is conducted. A hybrid model, in which smaller phase II human clinical trials are backed by robust data from well-characterized preclinical models, could also provide a model for regulatory approval for drugs where the small number of patients does not allow for larger Phase III trials.

The threat of antibiotic-resistant bacteria will only continue to grow. As new antibiotic therapies can take a decade or more to go from discovery to market approval, the time to jumpstart the research and development process is now. Drug developers, regulators and the research community must work together to make sure we have new options available before small and sporadic outbreaks of antibiotic-resistant diseases become a large-scale public health emergency.


1 U.S. Department of Health and Human Services, Centers for Disease Control and Prevention. (2013) Antibiotic Resistance Threats in the United States, 2013. Retrieved May 4, 2017 from https://www.cdc.gov/drugresistance/threat-report-2013/index.html

Gabe Meister, a Research Leader at the Battelle Biomedical Research Center, has more than 15 years of research experience in viral and bacterial pathogenesis, medical countermeasure discovery, testing and preclinical model development. Gabe currently serves as lead scientist on various multi-study programs focused on advanced development of medical countermeasures against biological threats and emerging infectious diseases. The work Gabe has supported over the past decade has been presented at national and international meetings and has been part of applications submitted to the FDA seeking marketing approval.