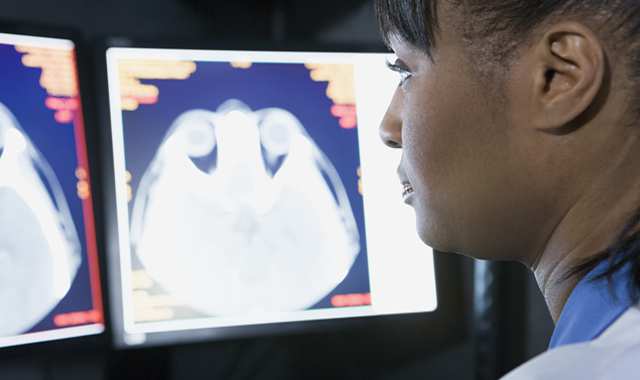 Six years ago, Ian Burkhart broke his neck diving into the waves at the Outer Banks, permanently losing feeling and control of his body below the shoulders. In 2014, researchers at Battelle and The Ohio State University gave him some of that control back with Battelle NeuroLife®, an experimental brain-computer interface (BCI) that allowed him to control his fingers, hand and wrist using conscious thought. Ian recently shared his story at SxSW, and researchers published the study results in the April 2016 online edition of Nature.

How does neural bypass technology work?

When the spinal cord is broken, signals cannot get from the brain to the body parts below the injury (or from the body back to the brain). It’s like severing a phone cord—signals are sent from one side, but they can no longer be received on the other end. NeuroLife uses technology to bypass the damaged part of the spinal cord and route signals from the brain directly to the muscles in the fingers, hand, wrist and forearm.

To make it work, the system needs several components:

• A way to receive electrical signals from the brain. Surgeons implanted a special chip directly into the part of Ian’s brain responsible for movement in his right hand and forearm. The chip is able to “listen in” on electrical impulses sent by nearby neurons.

• An amplifier to magnify the strength of the signals from the brain.

• A way to interpret the signals from the brain. NeuroLife uses a sophisticated algorithm powered by Battelle EluciData® to analyze the vast amounts of data collected by the chip and separate out meaningful signals from noise caused by other brain activities.

• A stimulator that translates these signals into specific muscle actions. The stimulator sends electrical impulses to electrodes attached to Ian’s arm using a complex sleeve device with more than 100 electrodes. The electrodes are used in combinations to trigger different muscles to contract, thus creating the desired movements.

Altogether, the system works to allow Ian to move his fingers, hand and wrist by thinking—just like most of us do. The difference is the connection is made outside of his body using technology instead of inside his body via the spinal cord.

What are the current limitations of neural bypass technologies?

Right now, NeuroLife is only usable inside the lab. There are several limitations that will have to be overcome before it will be viable for unsupervised home use.

First, the current system is not portable. Study subjects must be physically tethered to the equipment. One cable goes from the implanted chip in the brain to the amplifier and signal processor. Another is used to connect the sleeve and stimulator to a PC that tells the stimulator what to do. The technology used for the initial study is very bulky; smaller wireless technologies that would improve portability have not yet been approved for use in human trials.

Another limitation is that the system must be recalibrated at the beginning of each session. This is due to variability within the brain rather than problems with the equipment. The brain is constantly changing and rewiring itself; the exact pattern of neurons that fire when you decide to make a fist today is slightly different than the pattern that fired yesterday. Individual neurons die and are replaced, and factors such as mood, level of alertness, medication, distractions and small movements of the chip within the brain can all impact the electrical signals that are detected. Currently, that means that each session starts with a calibration exercise to retrain the software so it can understand the instructions the brain is sending.

What is the ultimate vision for NeuroLife?

The ultimate goal is to have an adaptable, wireless and portable system that can go with users anywhere they want to go. Here’s what it might look like:

• Sleeves with electrodes would be worn on each arm. The sleeves would be fast and easy for patients or caregivers to slip on and adjust.

• The sleeves and brain implant would communicate with the amplifier, signal processor and a small computer via wireless technology, such as Bluetooth.

• Everything would be attached to a rechargeable portable power supply with enough juice to last the whole day.

• The entire system—including computer, power supply, amplifier and signal processer—would be small enough to be mounted on a wheelchair or carried in a backpack.

• Automated calibration protocols would run each morning to quickly recalibrate the system.

What are the next challenges that need to be solved to get there?

One of the next steps will be refining the algorithms so they are better able to adapt to the variability in the brain. Battelle is analyzing the vast amounts of data gained from the two years of experimental sessions in order to better understand and predict this variability. This is an important first step toward developing software that can automatically recalibrate and adapt to these tiny changes in neural pathways.

There is also much work to be done in development of devices that can listen in to a broader range of neurons. Most neural implants in use today have a very narrow focus, with each electrode only collecting signals from one or two nearby neurons. The chip used for the NeuroLife experiments is a multi-electrode array with 96 tiny electrodes, each of which can listen to dozens of neurons. In order to expand the range of potential signals the system can pick up (and corresponding actions those signals can evoke), we need to be able to listen in to thousands or even a million neurons at once. That will also necessitate greater signal processing capabilities and more sophisticated algorithms to sort out meaningful signals from the huge quantities of data.

Eventually, it may even be possible to use a cap or headband instead of implanted chips to pick up brain signals. However, existing non-invasive options such as EEG have much lower information content than implanted chips, which limits the motions they are able to control. For the immediate future, it’s likely that the medical device industry will focus on creation of wireless implantable chips. 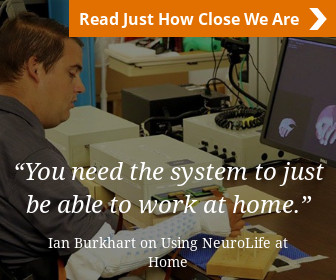 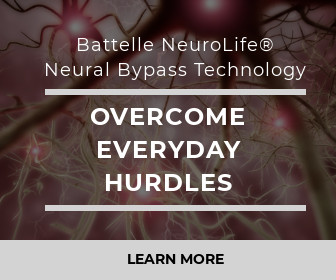