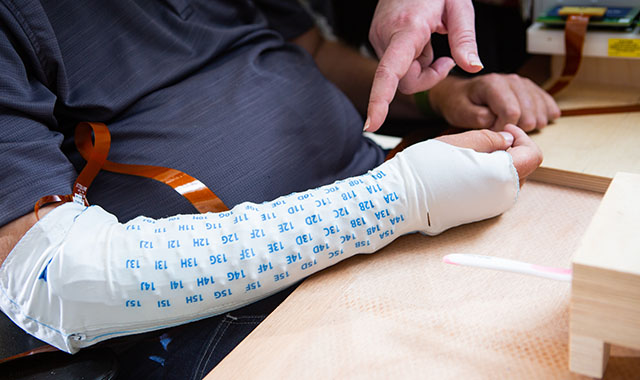 Fifteen years ago, overcoming paralysis was an international dream born of frustration. When researchers at Battelle decided they had a special idea, it became an idea of burgeoning hope. Could we actually help an individual who’d lost so much regain the use of his hand?

Not only did we prove that it could be done, a new collaborative paper from physicians at the Ohio State University Wexner Medical Center and researchers at Battelle shows that when the NeuroLife® system restores arm and hand function after paralysis, it would provide a meaningful improvement in the lives of people living with spinal cord injuries in a home environment. This paper’s results also support Battelle’s new goal to develop and mature the NeuroLife system to give new options for military veterans living with disabilities.

“Clinically Significant Gains in Skillful Grasp Coordination by an Individual with Tetraplegia Using an Implanted Brain-Computer Interface with Forearm Transcutaneous Muscle Stimulation” is the lead article published in the July issue of Archives of Physical Medicine and Rehabilitation. The lead author is the Wexner’s Dr. Marcie Bockbrader and was co-written by many Battelle scientists, statisticians and engineers who worked on the recently concluded clinical portion of the NeuroLife project.

“We provide evidence that if Ian could use this system at home, his level of function would be significantly improved,” Marcie said. “He would be more independent, and he would be able to do more things for himself. We are returning hand function to Ian through the use of this device.”

The protagonist of the story is Ian Burkhart, a Columbus, Ohio native who had a diving accident in 2010 that resulted in injury to his C5-6 vertebrae, leaving him paralyzed from the mid-chest down with no arm or hand control below the elbow. He volunteered in 2014 for the joint OSU/Battelle program that began with the surgical implantation of a tiny electrode array inserted onto the surface of the motor cortex of his brain. This created a brain-computer interface (BCI): The chip could collect neurological data from the part of his brain that governs his hand movement, and Battelle-invented hardware, software, algorithms and artificial intelligence would translate those thoughts into action.

Between 2014 and 2019, Ian participated in 483 sessions in labs at Ohio State and was progressively more successful in using his hand do a variety of everyday tasks that one would need to be at home without round-the-clock care. Data for the paper was collected from the 137th day after implantation to day 1,478.

One of the goals was to prove that people with paralysis would prefer to use their own limbs to move and manipulate objects instead of controlling a robotic arm with their minds.

“I’m definitely more apt to use this device to control my own hand than a prosthetic limb,” Ian said. “I can do more things with it. My arm is on my body, so that means I always have it with me. I can’t lose it or forget it. And if you need assistance in setting up the system, this is one less thing you have to worry about. It’s a more natural approach.”

Battelle Research Scientist and Electrical Engineer Nick Annetta, a co-author on the paper who has been involved since the project’s inception, said the sessions were designed to allow Ian to perform a battery of standardized clinical assessments.

“We had him using a pinch grip to grasp objects, moving them, picking them up and putting them down,” Nick said. “We were testing his grip strength.”

Nick said the process was painstaking.

“This was laborious,” he said. “We had to train decoders that interpret Ian’s brain signals over and over. But it shows that his ability to use the technology would allow him to improve in a way that is significant. It wasn’t every test that he improved on. But there were enough that it was clinically significant.”

Marcie said that the research group also thought about ways to improve the NeuroLife system so that it could be taken into a home environment, especially Battelle’s functional electrical stimulation (FES) sleeve that Burkhart wore on his forearm during sessions.

“When we compared Ian’s performance on his ability to manipulate objects, he was able to use his hand to manipulate those objects within the boundaries of what would score as normal, as compared to what robotics were able to achieve,” she said. “Comparing FES to what the robotic arms can do, we get closer to healthy and normal with FES than we do with the robotic arm.”

In addition to providing evidence that Ian’s functional motor level improved when using the BCI-FES from C5-6 to C7-T1, the paper indicates the translation from clinical to home use could decrease dependence for activities of daily living.

“This marks a critical translational step toward clinical viability for BCI neuroprosthetics,” Marcie wrote in the paper.

The paper concludes that next steps should address translational barriers: (1) developing accurate, faster, performance sustaining decoders and (2) developing wireless, portable, and wearable components—all of which are necessary for this technology to be used as a stand-alone system in the home environment.