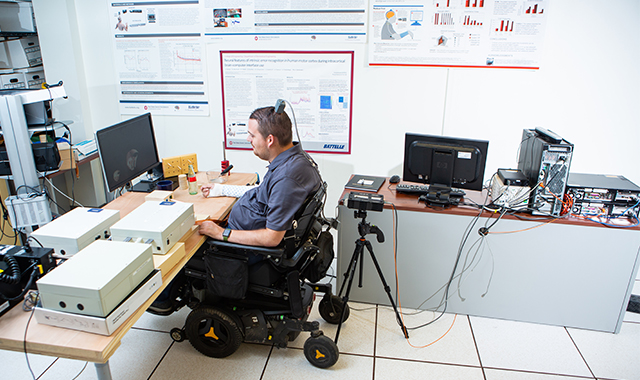 It started out with the belief that we could help restore movement for someone who had lost so much. We wanted to make his hand work again, like it had before his injury.

Five years and many successes later, Battelle’s NeuroLife® program succeeded beyond anyone’s expectations and has launched Battelle into a new era. The study came to its conclusion at the end of May, but it’s only the beginning for Battelle. The world’s largest nonprofit, independent research and development trust has enhanced its neurotechnology staff and expertise and won contracts from the federal government’s forward-thinking government agency, the Defense Advanced Research Projects Agency (DARPA).

The next goal for the technology is to make the NeuroLife technology an in-home product to restore freedom for injured and paralyzed veterans who lost use of their hand in service for our country. The burden of this injury for the brave men and women who have defended the nation is immeasurable and providing new options for them is one step toward repaying that debt of their service.

Now, the Battelle team is in the process of shrinking the NeuroLife system to a small packet that could be affixed to a belt or chair. Other necessary advances to enable NeuroLife for home use include making the system more rugged, with higher accuracy, faster response times and shorter setup times.

Platform technologies such as NeuroLife are designed to be applicable to many forms of injury that involve the motor system. As the technology matures, the team is expanding its uses to address traumatic brain injuries and stroke rehabilitation. Plans for a second phase of the NeuroLife technology, with multiple participants who will be taking the system home with them, are in the works.

“We have established a leading position in this field of research in a very short time, and we intend to continue to make big breakthroughs,” said Battelle President of Contract Research Matt Vaughan. “We are excited, committed and convinced that we are on the right path to making an enormous difference for people living with paralysis.”

The NeuroLife study, conducted in partnership with The Ohio State University Wexner Medical Center, began with the wiggle of the index finger of study participant Ian Burkhart’s hand on June 18, 2014. It was the first time he’d moved his hand since a dive into the Atlantic Ocean four years earlier resulted in a spinal cord injury that left him paralyzed from the chest down.

Surgeons at OSU placed a Blackrock Microsystems Utah Array onto Ian’s brain, which was wired to a system of computers that used artificial intelligence algorithms to decipher his intent to move, the moment-to-moment neural code, and translated it into commands for a Battelle-invented sleeve that stimulated muscles in his forearm to reanimate his once paralyzed hand.


During the first NeuroLife project run, many milestones were crossed. First was that Ian could move his hand at all. Then, moving his fingers independently, then calibrating his grip strength. A paper published in Nature Medicine from the NeuroLife team introduced a novel deep neural network decoding framework aimed at increasing system usability to facilitate the transition of the technology from the lab to the home setting.

Ian, recognized as more than a participant but collaborator in the program, participated in 483 sessions with the Battelle/OSU team over the course of five years. The team published many important scientific papers, made dozens of appearances at conferences (including South by Southwest and a keynote address at The MedTech Conference by AdvaMed) and was the subject of hundreds of television, magazine and newspaper articles. The Battelle team’s experience and publication record makes it uniquely prepared to design the next generation of NeuroLife technology that is most functionally relevant for people in their everyday lives. The work has also led to an impressive array of patents and intellectual property that will support the development of new commercial products.

“As neurotechnology moves out of the lab and into everyday life, the ecosystem of people and uses of neural interfaces will grow tremendously,” said Battelle Fellow Justin Sanchez. “It is essential that the technology be tailored to support what people care about the most; the function of their brain and how it helps them to live, work, and play.”

The team at Battelle is pioneering the most advanced research and development of neurotechnology that will shape the future vision of neurotechnology products. Key enablers from the Battelle team include new DARPA contracts to develop minimally invasive brain-computer interface systems and the design of new decoding algorithms to make neural interfaces more plug and play.

For 90 years, Battelle has answered the directive of its founder to use science to help society. As the next chapter of Battelle work in neurotechnology unfolds, the development of technology to make the world a healthier, safer, and more secure place remains a core tenant. The mission makes it an imperative. This goal remains the same, whether it is restoring movement to a singular veteran or the possibility of next-generation neurotechnology being embraced by millions of able-bodied individuals. 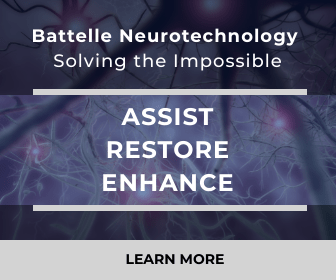