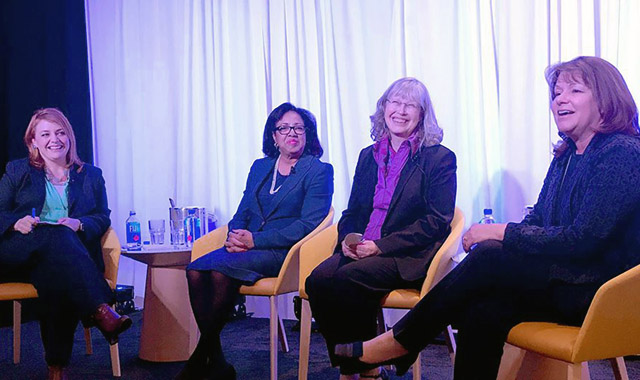 Battelle is proud of all the solvers who work to help us address the world’s most challenging problems. Each March, we take time out to recognize those with two X chromosomes.

The theme for Women’s History Month 2018 was “Nevertheless, she persisted” and the Battelle Women’s Network hosted two events with that in mind.

The first was a luncheon for employees who were recognized for their outstanding contributions.

“All of the honorees come from diverse backgrounds, personally and professionally, that show their fierceness and determination to overcome challenges. These women exemplify perseverance in all aspects of the busy and fulfilling lives they lead,” said Mary Sheehan, a Principal Research Scientist at Battelle and co-chair of the committee that organized the luncheon.

The second Women’s Network event featured three members of Battelle’s Board of Directors.

The women participated in a panel discussion moderated by Aimee Kennedy, Senior Vice President for Education, STEM Learning and Philanthropy. Topics covered during the discussion hit on everything from how women can help lift each other up to the concept of “fake it ‘till you make it.”

When asked about her approach to being the new person in a high-ranking job, Stephanie said speaking up was her “go-to move.”

“I realized that I had an opportunity that the many other men in the room didn’t have. When I spoke up, people did stop and listen. Now they may have been wondering what idiotic thing is this woman going to say, but I had a chance to be heard. I stood out,” she said.

Zan said that one of her mentors showed her how to be a great communicator and that sometimes the simplest things speak volumes.

“You would walk into his office and he would drop everything and look at you with all of his attention. And that attention was on my pissant little problem. I tried to model that behavior later on,” she said.

Vicky said helping other women to move up in their careers is an important emphasis for her.

“It’s very important for me to give back. I speak to lots of different women’s groups. People will email me or give me their cards. I try to do lunch with them or coffee, to offer myself as much as I can. It can be lonely, especially in areas that have traditionally been male dominated,” she said.