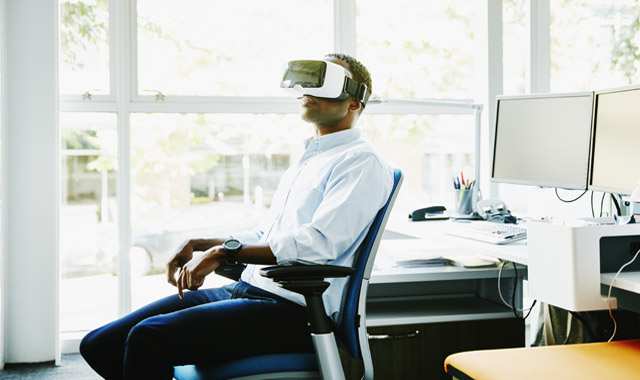 Computer-aided design (CAD) offers engineers and designers an effective way to get their ideas down on paper, so to speak.  And 3-D versions of CAD provide additional views to help designers get the full picture. But there are limitations to what CAD software can show.

That’s where virtual reality (VR) and augmented reality (AR) come in. Virtual reality has been used in a variety of ways over the years and has become a pretty familiar sight in mainstream pop culture. Augmented reality (think of it sort of like a hologram) is a bit newer, but gaining traction. These tools now are being used at the beginning of the design process and it’s a gamechanger.

Imagine you have been tasked with creating a very large piece of equipment that performs multiple functions. You draft a rendering of the equipment using CAD, creating multiple views and perspectives. You show it to your clients and they are pleased with design and ready to proceed with building it.

After millions of dollars in materials and man-hours building the equipment, the machine is put into use. It doesn’t take long to see there are some problems. There have been reported incidents with valves on tanks being open when they shouldn’t. And coincidentally, multiple reports of workers with rips in their cargo pants.

If the engineers of the equipment would have been able to use VR or AR when designing it, there’s a great chance they would have been able to prevent both of these occurrences. When the specs of the equipment are put into a VR or AR environment, engineers are able to see that valves on some tanks are located in just the right spot for the workers’ pants to get caught on them – causing the rips in the pants and the dangerous accidental opening of the valves.

A catwalk area on a similar project was the focus of a different VR review. This time it was determined that the catwalk built to provide access to some of the components would only work if the crew sent in Flat Stanley. There was no way a normal-sized person would be able to fit.

Using VR or AR in the early stages of a project can have significant safety, cost-saving and time-saving impact. Battelle has used VR for a number of years – specifically as a training tool for military use. But that use has expanded recently to address engineering challenges. Those challenges have included everything to large equipment like that in the above examples to much smaller items, like a medical device.

If you take the overall shape of a proposed medical device and then use AR to determine even the most basic of concepts, such as the placement of buttons, device manufacturers can save themselves significant time and money. Using AR, you can move the buttons anywhere you want on the device and get a real feel for how it would actually work. You could come up with 100 different combinations, then pick the top three that seem to make the most sense and build 3-D renderings or prototypes of those.

As technology continues to advance, the use of AR and VR early in the engineering and design process seems likely to grow exponentially.