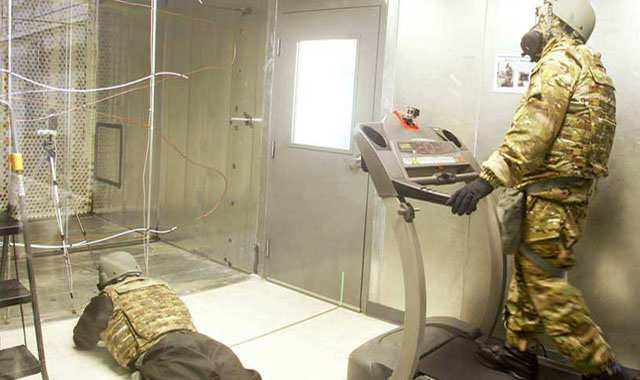 As such, their challenge is not only to deliver proven materials and equipment that protect warfighters and citizens from complex and diverse chemical/biological attacks—but to do so at a fast and cost-effective rate. They must be scientific, innovative, and profitable.

The key to success lies within a new material and product testing methodology.

Historically, defense manufacturers relied on chemical and biological simulants to validate product design and performance. Often, they wait until the end stages of product development to test their material against the actual threat because they believe that these tests present logistical challenges or high costs.

Are these perceptions true? Is testing with simulant agents really the best path for product development?  Or, is there a better, more cost-effective way to introduce live-agent testing early in the development process to help the manufacturer accomplish their end goals?

Here are three reasons that testing with simulant agents could be putting your products, and your business, at unnecessary risk.

Testing equipment and fabrics with chemical and biological simulants, instead of the live-agents themselves, can only go so far.

Live-agent testing, as opposed to simulant-only testing, allows manufacturers to know exactly how their equipment will perform when exposed to the actual threat agents.

As the programmed spend for CBRNE products continues to tighten in the US, manufacturers must be diligent about bringing proven products to market with increased efficiency.

Using simulants to validate equipment, especially early on, may leave manufacturers exposed to costly development redesigns once the product is exposed to actual threat agents. This, of course, costs the manufacturer time and money.

Incorporating live-agent testing early in the process offers reduced risk to the overall development program. Often times, this test data can also provide critical input into the development process to identify limitations that need to be addressed or areas where development efforts should be focused.

Failure is never the preferred outcome, but it is much better to fail early in the process before a full investment is made.

Simulants are only able to represent a portion of the chemical and physical properties of agents. Using a simulant to evaluate a detector or decontaminant only tells the developer that their equipment works against that simulant.

A 2003 National Research Council (NRC) report discusses the limitations of testing detector systems against simulants only. It notes: “Detecting and measuring the spectral features of a CWA in the presence of thousands of background spectra using complex chemometric techniques requires statistical testing of simulants in both laboratory and field environments as well as laboratory testing of the various CWAs. It is these factors that result in the large amount of testing which has to be done to assure detector performance.”

Testing against simulants that mimic a chemical attack, for example, can be helpful, but the tests provide far less assurance that the technology and equipment being developed and deployed will be effective.

Live-agent testing is vastly superior and far more operationally relevant than testing a technology against only simulants.

One of the nation’s national security priorities is developing equipment to deter, respond to, and recover from threats posed by weapons of mass destruction (WMD).

According to the Department of Defense, chemical and biological weapons specifically present a complex, diverse, and growing threat to American citizens. Rapid advancements in technology combined with the proliferation of technological “know-how” has exponentially increased the possibility of these attacks—raising the need for superior detection equipment and protective materials.

Early live-agent testing, rather than simulant-only testing, is critical to the success of today’s manufacturer against this reality.

Read our white paper, Early Live-Agent Testing: The Competitive Edge for Manufacturers Specializing in Chemical & Biological Defense Equipment, to learn more about implementing this process into your product development workflow.